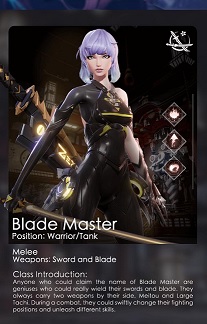 Blade Master is a tank class in Dragon Raja with decent melee DPS and powerful abilities. With high durability and toughness, you will be able to lead from the front and smash the enemies in close-range duels. As a Blade Master, you are good at inflicting damage and soaking damage from the opponents. In this Dragon Raja Blade Master build, we will guide you through the core build, gems, talents & skills of the Blade Master class. So let’s not waste any time and check out the build.

For Blade Master, you have to focus on increasing its Physical attack and AP score. By focusing on these stats, we mean to say that Blade Master will perform much better if you improve these score stats. And, to build it in this perfect way, you have to equip the right type of gems in the core slots. Blade Master’s main element is fire – so make sure to equip Fire gems to increase skill damage.

Conclusion – build STR or INS score as it increases the Physical Attack and AP stats of the Blade Master. Equip the gems that increase this score(STR or INS). Optional – you can also build it as a tank and improve PHY DEF, HP by building CON score. But if you want more damage, focus on STR or INS.

that would be tank build

So this would be our Dragon Raja Blade Master Gems build.

So this would be all in this post on Dragon Raja Blade Master build, gems, skills & talents guide for newbies. If you have another core build or gems recommendation, comment below.