Wondering how to become Army Officer and Army Enlistee in BitLife? Read on and find out BitLife – Life Simulator walkthrough guide to Army Careers

In BitLife, to become an Amry Officer, you need to graduate from the University in any field. And, to become an Army Enlistee, you just need to pass out from high school. After completing these minimum education qualifications, all you need to do is apply for the jobs; Army Officer or Army Enlistee. Stay at these positions for consecutive 20 years to get the career achievement. While working on these positions, your commander officer might order you to deploy on some military missions in other countries. Accepting the proposal opens up the mini-game called Military Deployment Minefield – it’s similar to the Minesweeper game. You can win the medal if you pass this game.

Also, if you want to earn BitLife Hero Ribbon, then these two job positions would be a good choice. When the character martyrs/dies after contributing to the army, the game gives Hero Ribbon. So this is the summary of this post. Let’s learn everything in detail – how to become an Army Officer and Army Enlistee in BitLife – Life Simulator.

Average stats in all the aspects would do the job. You must be enough smart(50+) to enroll in the University if you want to become an Army Officer. Look does not matter. Happiness and Health should be average if you don’t want to get into unnecessary problems like depression, diseases. So we would recommend 50+ stats in Happiness, Health, and Smart. Start over with a random character if the current character’s stats are poor.

For Army Officer – Pass out from the University with any degree. For Army Enlistee, graduate from the High School. 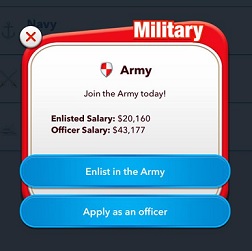 Apply For The Jobs

After meeting the education qualification requirements, tap the occupation button -> Military(Join the military) -> Army -> Appy as an Officer or Enlistee – depends on the career that you want to pursue. And that’s it. Now you have to stay at this position for 20 consecutive years. 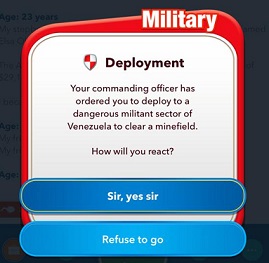 Deployment In The Military

Make sure to accept the deployment proposal. If you reject it, you will be dishonorably discharged immediately. And that would end the career’s journey in the Army. You can not earn it back.

Accepting the deployment proposal, proposed by the commanding officer, opens up a mini-game called Military Deployment Minefield, which works on the Minesweeper game mechanics. A quick Google search will give you the rules – how to play and solve it. Also, you can practice by playing online – search “Minesweeper” on Google -> play -> start playing it. 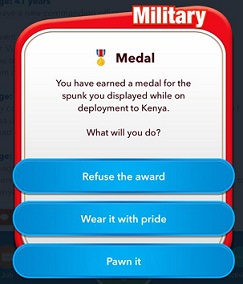 What If You Solve or Successfully Complete The Deployment?

You will get the medal; three options will appear on your screen after you solve the puzzle – refuse the reward, wear it with pride or pawn it.

What If You Fail To Solve or Complete The Deployment?

So this would be all in this BitLife – Life Simulator walkthrough guide to become an army officer or army enlistee.