Guardian Tales Favi Overview: find out how good is Favi in Guardian Tales – also, get to know about his skills, strengths, and more! 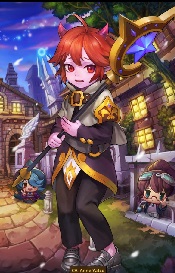 Favi is a water element 2-star grade healer in the game; also, one of the three main healers that are available in the game as per the current version of the game; Aoba and Karina! And, the third one is Favi! Unlike Aoba and Karina, Favi is more universal.

If you are going to fight with a team that has earth element characters, then Aoba would be a good pick – thanks to her party skill that buff earth attack. And, Karina for the dark team – thanks to the party buff. Favi’s party buff is linked to his chain skill; when enemies are suffering from any ailment, you can activate Favi’s chain skill that restores the party member’s HP. The party buff increases attack and healing for chain skill targeting units with “injured” ailment.

How To Get Favi In Guardian Tales?

Favi, the 2-star grade healer, can be acquired from the “world 3 – nightmare” or from the character gacha/summon.

How To Get Guardian Tales Favi’s EX Weapon?

Favi’s EX Weapon is “Jack Frost” that comes with a skill called Cheering Leader – upon activation, it increases the DPS of party members hit by the magic bullets. As of now, the EX Weapon is not available to obtain – devs may release it in upcoming updates.

Favi has two normal attacks; the first one is spell bullets, which does damage to the enemies. The second normal attack is “healing ray”; it’s a healing skill that releases a healing laser, which can restore the health of allies and remove negative effects – only characters that come in contact with the laser gets the benefit.

Chain Skill: it restores the health of party members. You can activate it by putting enemies into any ailment; use the weapon skill put them into ailments. If you want to get the benefit from the party buff, you should put the enemies into the injured state so that chain skill can provide more healing and attack.

Special Ability: when spell shots hit the friendly units in the party, they recover their health by 3% of heal.

So that’s all we got in this post on Guardian Tales Favi Overview.