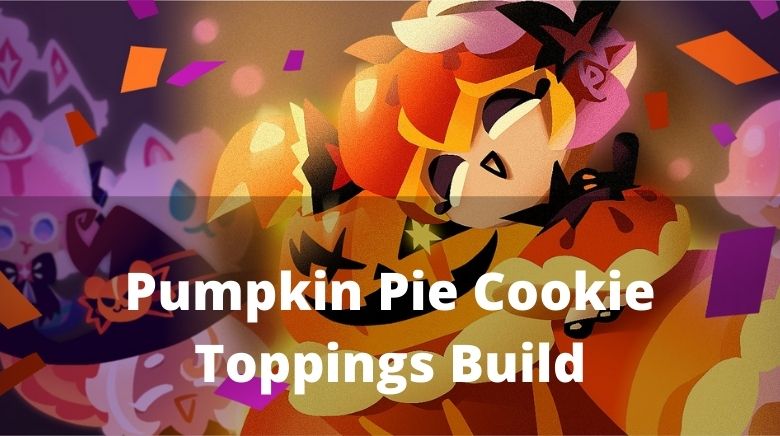 Pumpkin Pie Cookie’s DMG is also good, if you want this cookie to inflict more DMG, then another alternative Pumpkin Pie Cookie Toppings build would be X5 Searing Raspberry with DMG resistance sub stats. For a balanced ATK/DMG Resist build, you can use 3 searing raspberry toppings and x2 solid almond toppings.

Some players prefer to use X3 Solid Almond and X2 Swift Choco Toppings.

NEW COOKIE! Pumpkin Pie Cookie is a Cookie character in the Cookie Run Kingdom, which was announced on October 26th, 2021. The cookie is going to be released on the occasion of the Halloween Event. After getting and testing the toppings on Pumpkin Pie Cookie, we will update the topping build. As of now, it seems that Swift Choco topping OR Searing Raspberry Toppings build set would be a good one for Pumpkin Pie Cookie.

It’s Halloween, a time of spooky fun for all ghosts and cookies. And amidst the Jack -o’-lanterns adorning the streets, stands Pumpkin Pie Cookie watching others dressed up in their costumes. Perhaps it’s because she was made of a pumpkin that grew in the shade of an abandoned house, untouched by the sun, but shee seems… distant, even though she has a smile on her face. One might try to escape this Cookie’s uncanny presence, but there is something eerliy captivating in the way she slowly bats her eyelashes… Pumpkin Pie Cookie’s favorute things on Earthbread are her fluffy and poofy dress that resembles a pumpkin and the old, tattered doll she always carries around. this cookie will hold your hand and drag you to play with her whenver there’s an exciting festival. Suprisingly, no one has ever said no. You can only wonder if it’s because of Pumpkin Pie Cookie’s doll that looks almost alive or the gaint wavering shadow behind her